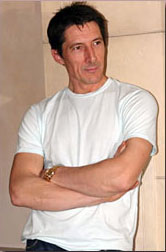 (10 episodes)
Filmed in Spain. Setting is southern California during the Spanish settlement period. As Dr. Robert Helm, Peter was a regular in this female Zorro type fantasy. Helm is a former military officer who has turned to medicine in an apparent attempt to redeem himself. Valentine Pelka, Highlander’s Kronos, played the antagonist. Syndication.

The “stargates” in this series are ancient portals used to travel to distant planets, encounter aliens, and meddle in their affairs. Peter plays Hebron/Tanith in several Stargate episodes. Hebron is the Tok’ra host for the Goa’uld symbiote Tanith. During this arc Tanith claims to be a friend. Showtime.

(Titled Race Through Time in the UK)
After a policeman sneaks into a time machine to save his father’s life, Peter’s character, Mark Mason, allows the man to stay in the past despite the danger, because he believes it will further his time machine research. Fox Family.

A man undergoes an operation to regain his eye sight, and wakes able to see an alien woman who is invisible to everyone else. Peter plays Dwight Borden, the man from the drug company. Showtime.

Cade Foster, played by Sebastian Spence, battles the Gua, an alien race set on dominating Earth. In “Shadowland”  Cade undergoes regression therapy to explain the strange images he is experiencing. Peter appears in the flashbacks as the Gua, Dr. Rook, who apparently interrogated Cade in the past. Jim Byrnes played the therapist. Sci Fi Channel.

Peter played best selling author Conrad Gordon in two episodes of Cold Feet, but only “Strange Loves of Shelly Bumstead”  aired before the program was cancelled. The regular character Shelley Bumstead is attracted to Gordon’s photo on his book cover, and fantasizes about the author. NBC.

Strange World was a well done, but short lived series in which ethically questionable science was investigated by the ailing Dr. Paul Turner. In three episodes Peter played Dr. Terrance Shephard who ingratiates himself to Turner’s girlfriend and doctor, Sidney. Is he for real, or another scientist playing god? ABC, later Sci Fi.

A documentary by Elizabeth Gracen (Highlander’s Amanda) about the lives of contestants in a drag queen pageant. Peter plays a female psychiatrist, Dr. Pat Haig, who is interviewed by Gracen, interspersed through out the film. Independent.