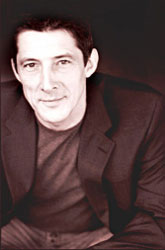 (15 episodes)
A Canadian police drama about a squad that works old cases. Peter played the ambitious inspector Simon Ross, brought in to liven up the department. CTV.

Peter portrayed Giles Seton, a crooked engineer who designed the viper complex and now wants to steal the defender car. Having kidnapped Cole, he replaces him with a surgically altered duplicate who becomes difficult to control. Pet Fly/Paramount.

Peter played the bad guy, Scott Brunell, with an Aussie accent. Peter only had a few lines, and the character is kept at a distance. Pet Fly/Paramount. Now on Sci Fi channel.

(6 episodes)
In this series about veterinarian Noah Kirby, Peter portrays his son Tom, also a vet. Tom resists joining Noah’s practice, but helps for a time. Lots of father and son conflict, and animals. Carlton TV.

1996 TV series Murder Most Horrid  “A Life or Death Operation”

In this episode Dawn French is a doctor who is trying to kill the wife of a patient who died in her care because the wife won’t keep quiet, which will spoil French’s new gig as a TV doctor. Peter plays another young doctor who gets in her way in this funny program. BBC TV.

Peter did two voices: Mark, a casting agent, and Barry, a character from the TV series Nice Day at the Office. In this program Barry talks the lead female character into doing phone sex. BBC radio 4.